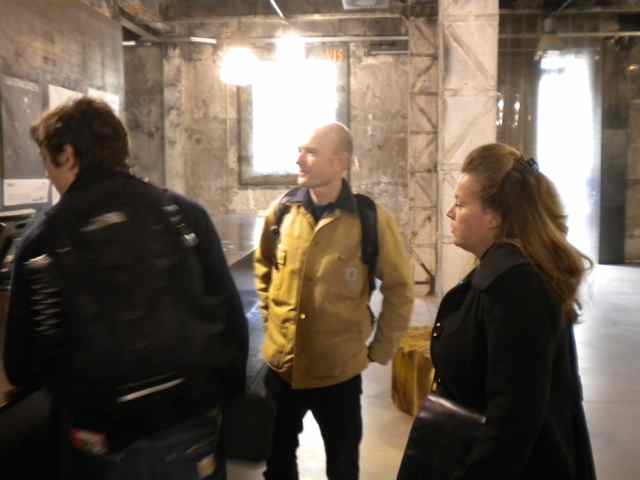 
Before the walk, Frank, one of the curators from Intermediae who works together with ER and helped write the concept and keep it alive asked if we had mapped a direction for the walk. I (Scott) replied we had ideas but wanted to open it to discussion: what ideas did the group have? Frank suggested and drew three points of interest on the map while in discussion with those sitting closest to him and they then passed the map down the table. Others drew onto it.
The group was 19 individuals from Ranchito, CP and other groups that are part of Ranchito Soft and thus much larger and broader in interests represented than we had anticipated. We had expected 4 from Critical Practice and 4 from Ranchito and so we had the map copied for each individual.
We suggested dividing into groups inclusive of members from groups people do not know or work with. Frank suggested the best way to do this was to count off in 4s and began a count off of the group. We asked if everyone could note any points of interest or ideas on the maps and we could collect these along with any digital photos after the walk directly or through ER and then set off on the Walk


The Walk
ER brought 4 yellow safety jackets, one for each group leader and we made our way outside. We began our walk through the extraordinary Matadero space. It is enormous, under construction, and very impressive in considering what it will become once inhabited.
I (Scott) was part of Group 2 and walked with Frank initially who was terrifically generous to share information, history, and experience about what we saw on the walk. The first building we walked by with a roof terrace was originally planned for Intermediae and their input in its design was copied in other buildings, though the plan for it changed.

We passed what will house the Spanish Theatre and Ministry of Culture with a rich discussion of the challenges of redevelopment. It all started without a master plan, which is the context. 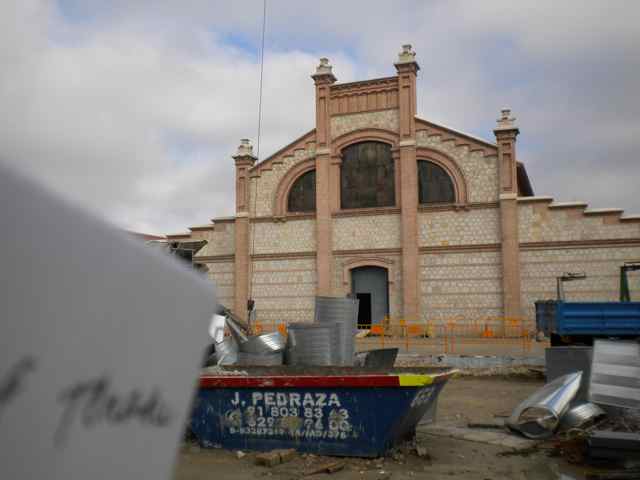 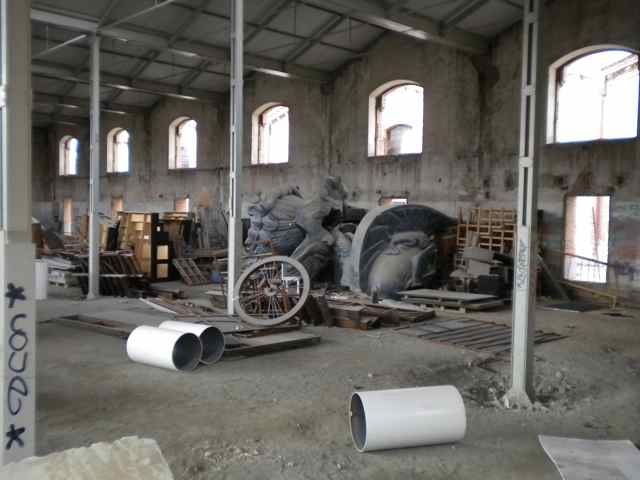 
Matadero was empty for over 20 years when an ambitious mayor wanted to make this new development. However, if the funding stops this would stop it being built.
Matadero is like a city and Frank said the first time he saw it reminded him of a concentration camp as it was designed for killing animals and had mould on the walls from that. One wall was later where the lined people up to be shot in the war and shaman hired in the beginning said there had been human killing there. There was an effort in the beginning to change to karma including with this shaman. We tried to take a short cut by cutting through the centre across the construction zone to exit the Matadero where we encountered our first obstacle: the safety fences closing off this route, where were overcome by retracing our steps to go around the buildings. 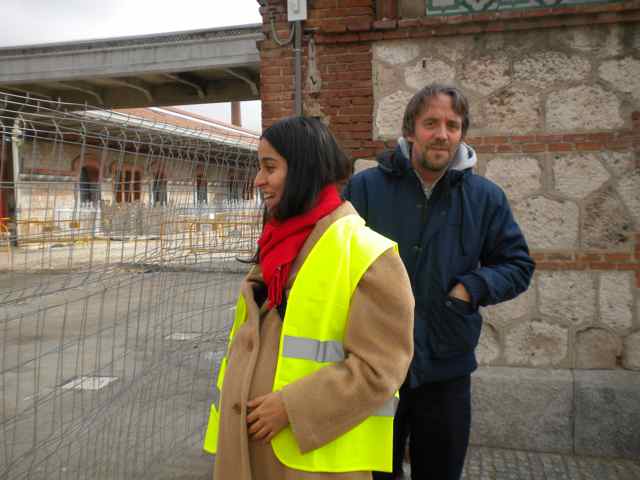 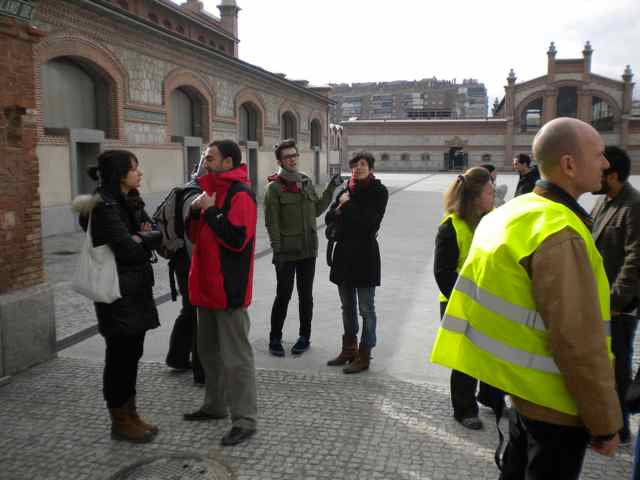 Fig 4-5: A Closed Fence and Walking Group Discussing the Ways Around It


With over 10 buildings there is expecting to be cross-pollination. There will also be a phase of consolidating the construction to leave what’s unfinished for a period of additional funding. 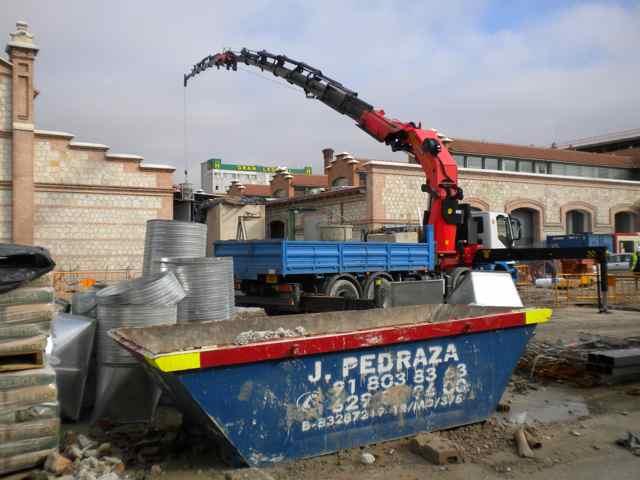 
Frank explicated how Intermediae is interested in how contemporary creation can be a constructive tool. It is a centre for resources, internationally known, for participatory sustainable practices. Initially Intermediae were given a white sheet for the whole project. In such a situation Intermediae knew it would have a huge undefined responsibility. We discussed how there are understandings of mediation, including by different groups in the project. Intermediae understands mediation to engage with people, open doors, not through a participatory questionnaire but in deeper practice. For example, if an artist proposed a participatory project under the basis it had worked in other countries they would ask how would it work here and develop this through a dialogue. We walked through the streets immediately outside Matadero which are undergoing building work and regeneration and passed the centre for giving out methadone. 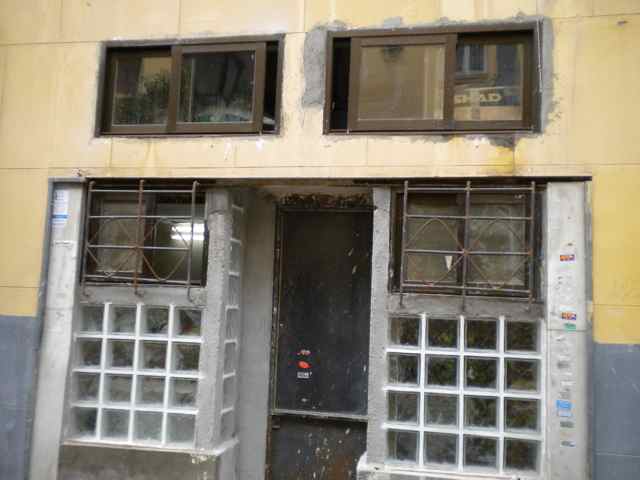 
As Intermediae was the first, by virtue of being there, not by planning but by acting it established the basic rules. For example, the development of their space was implemented and the idea of the Matadero being an experimental.


We continued our walk entering the district building, which has a cafeteria for the elderly. Here is a picture of a bench installed in the building as part of the city’s enormous restoration of the area. 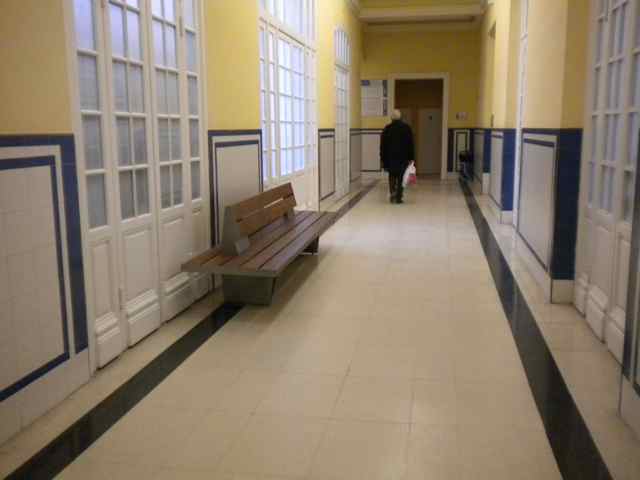 
We engaged in an emergent discussion about the potential of the Walk for Matadero and ER in the cafe. Everyone at our table contributed to this discussion of what the Walk could become for Matadero. 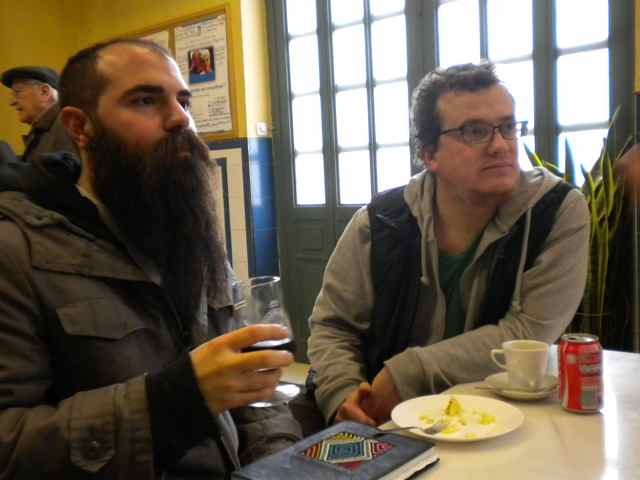 'Fig 9: Dialogue about What Walk May Become


Beginning with the idea that the Walk could be used to template a guided tour it was suggested this would not be planned but personalised by context of Matadero. For example, a guide could be constructed from the walk to walk the tour as a reinterpretation of a tour because there is currently little information for this available.
There is a group that makes a wiki map to which Intermediae added a hand drawn map by an artist.


It was suggested that the map that was created become the El Ranchito Map so that everyone who visited could use it.
The next visiting artists would have their ways of working and could add to it.
It would be provided as a resource: an accumulation of knowledge, which they could use. Experience of others information could be given to such artists in the future. 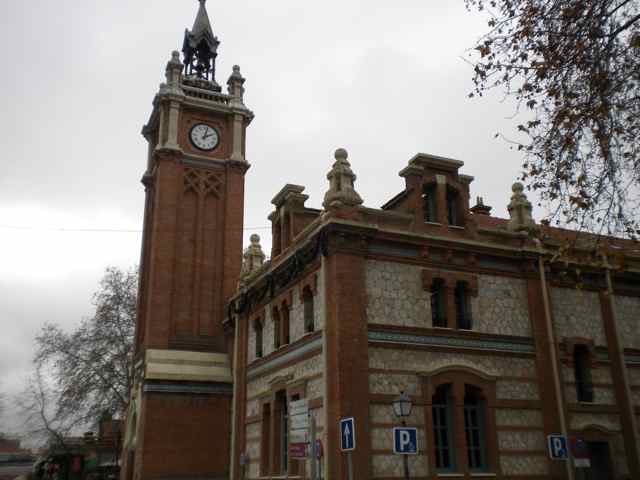 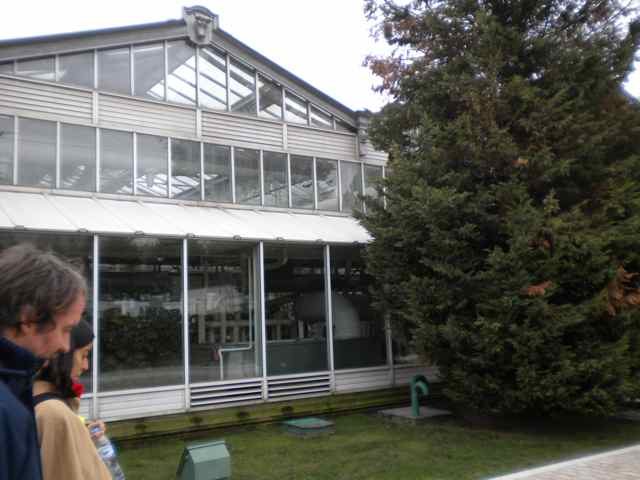 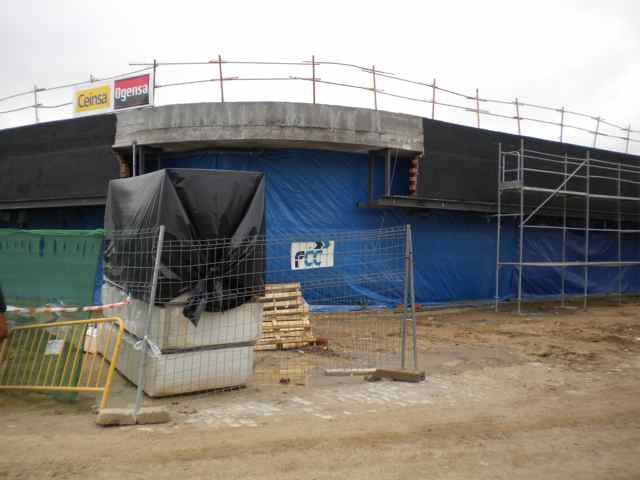 
We passed a greenhouse and paused outside the former entrance to the tunnel. Nobody knew what it would be and it was voiced that there are a lot of things in the city and here that happen like this.


Also, we encountered water hearing someone from the front say, “we have a problem.”
“What problem?”
“A lot of water”. To get past the construction area to the bridge we navigated though an passage way of mud. 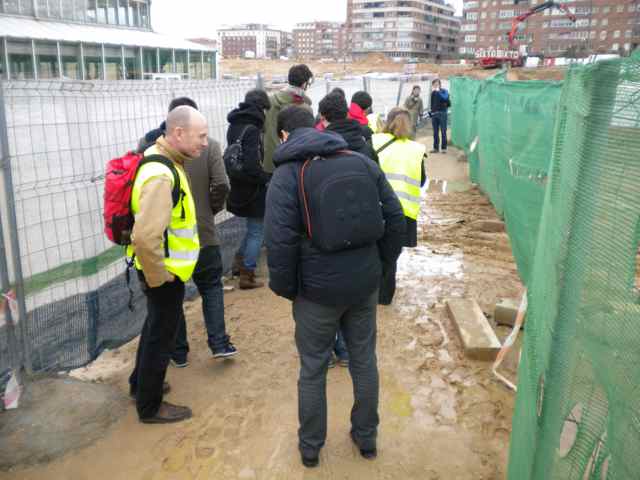 
We manage to single file walk around and over most of the mud on boards with excitement and without casualties
The new bridge opened weeks ago. The mosaic on the ceiling was an artist commission, which was participatory in involving the public through an open call to the neighbourhood to participate in the representation of sports figures. It is an inspirational example of participation gone well. We talk about if there will be construction problems though as the Millennium bridge encountered – but the bridge feel solid and does not shake. 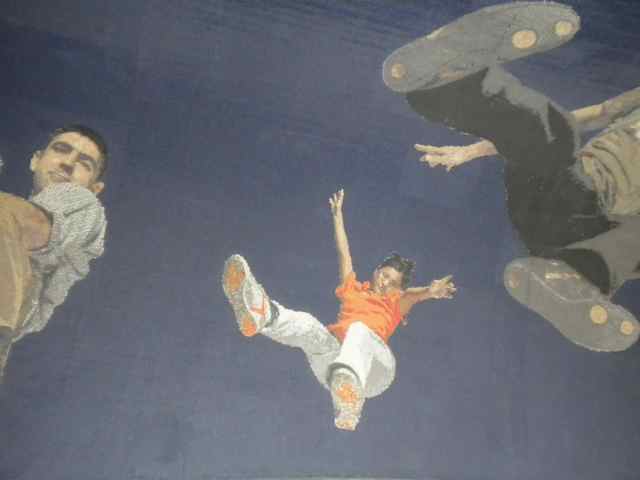 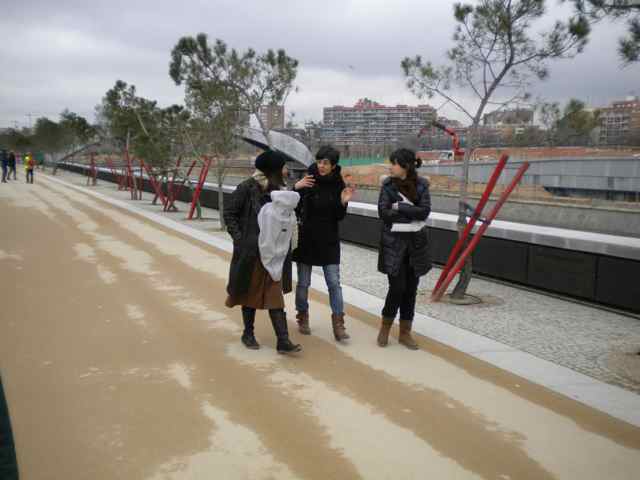 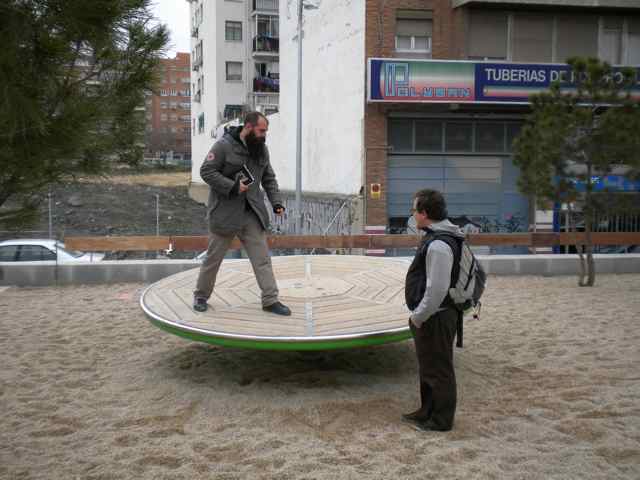 
We passed the signs that advertise the funders of the project and looked at the top floor of this building which is the highest area in Matadero and where the skins were dried. It is planned to be used as a new space for Intermediae, with a cafeteria also in the same building. Intermediae is currently 7-8 people with 2-3 interns and feels understaffed. As we approached the old water tank that will be converted into a new garden that uses captured rainwater, we paused and some returned to work. 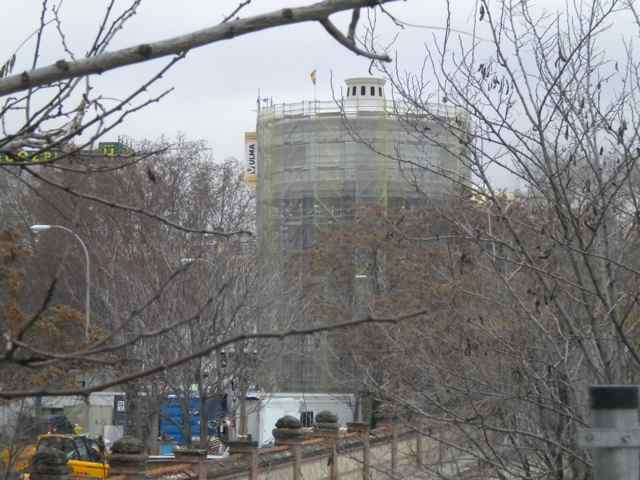 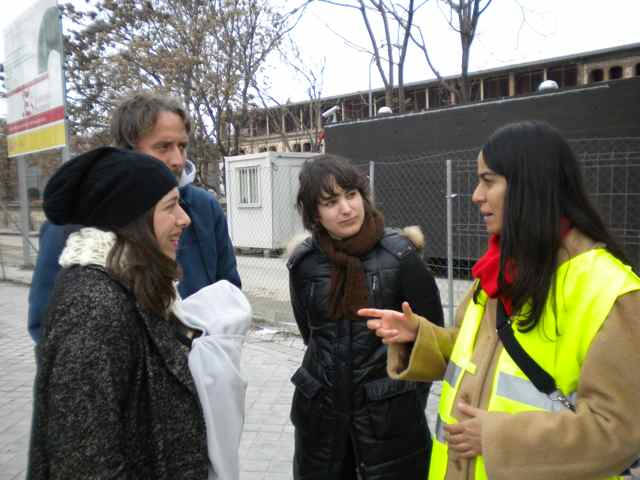 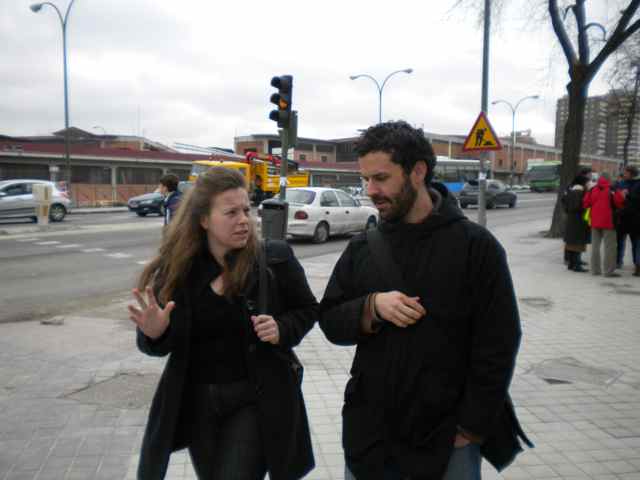 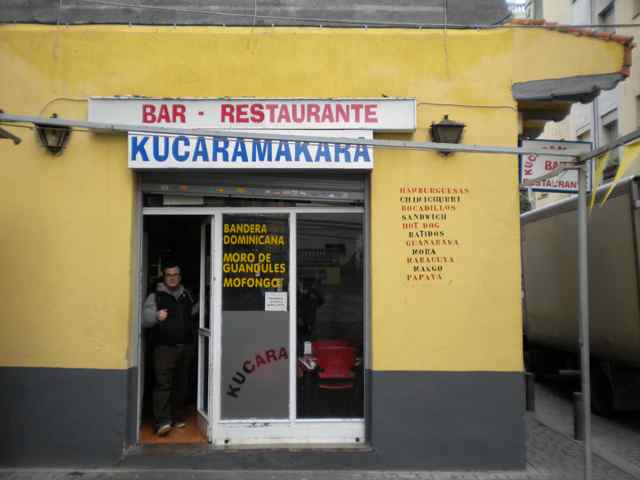 After the walk Critical Practice met at Bolivar 24 to debrief on the Walk and brief 11 January. To see notes click Debrief on a Walk on in Madrid