It was a condition of this workshop that attendees each bring with them an example of a (Mari inspired?) stall or something related. 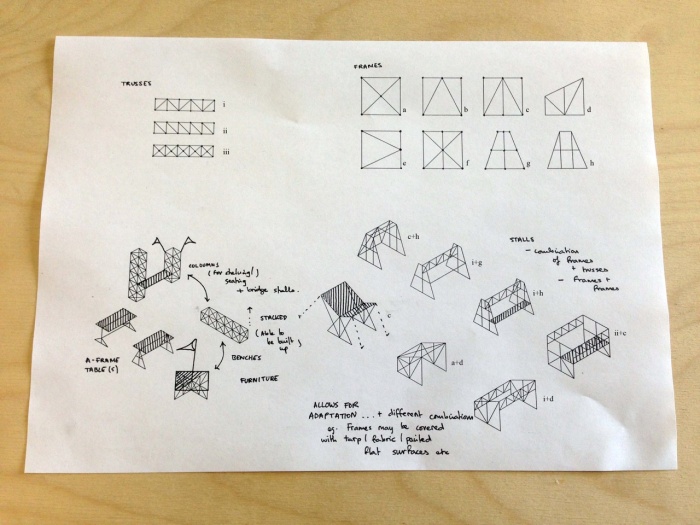 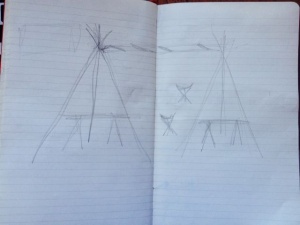 This design is for a large tripod stall structure. The stall is made from round wooden poles and secured together with recycled green cord from a previous Critical Practice activity, Utopographies. The frame is simple but could have a fabric covering, depending on the use of each stall. There is also a potential for striped canvas to be hoisted between tripods to create an ari of shelter. Tripod stools could also be fashioned to create collapsible, portable seating that could shift around the market with ease.(Proposed by Amy) 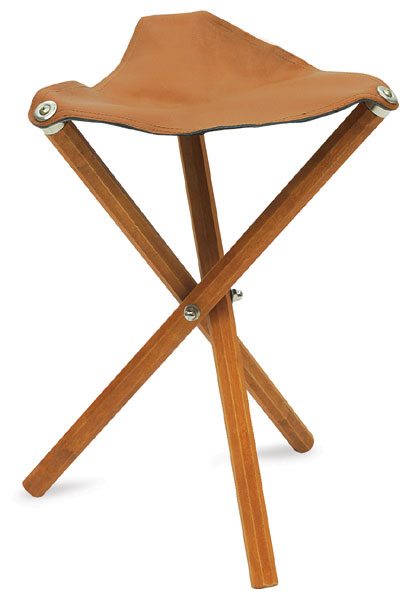 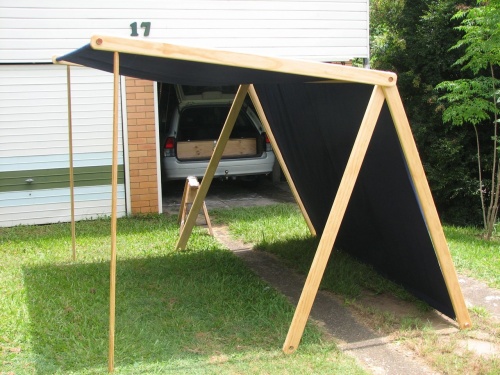 This inspiration comes from Robert Hook of 'Things Medieval': A basic market stall that is frequently seen amongst re-enactment groups and medieval events in Queensland. Follow this link for more info, including production instructions.(Proposed by Marsha) 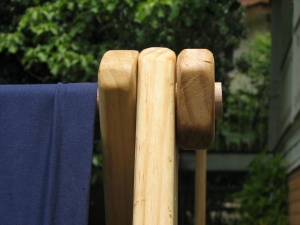 There is some debate as to the historicity of this design, and mixed opinions on the original source, but these have the advantage of not being obviously anachronistic, provide good shade, and can be erected by two people. Or one patient person with long arms. It's basically and A-frame. Follow this link for more info, including production instructions. (Proposed by Marsha) 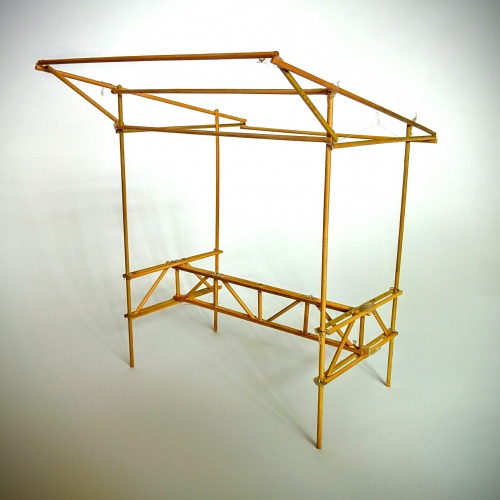 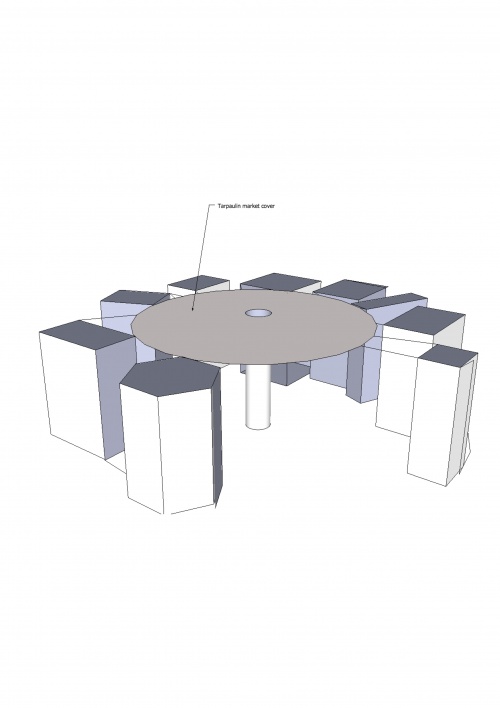 Proposed possible cover to the middle area of the market mainly for water and weather conditions.Round or hexagonal shape suspended and attached to the serenading stands with a whole in the middle to allow for water and wind scape. (Proposed by Karem) 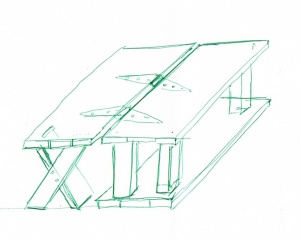 A low table that can be used as seating area, with the possibility to fold up on itself to become a high table that could be used in the stand.(Proposed by Karem) 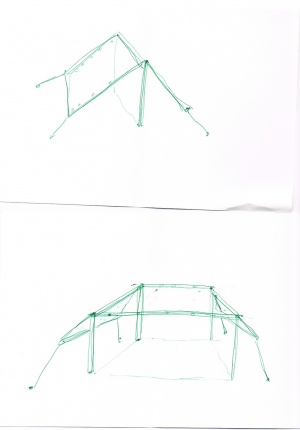 To use the Tarpaulins we have to rig up and create shelters using some of the leftover robes we have at our disposal and the anchoring point with in the ground. We have done some tests of one these prototypes yesterday and it proven difficult in windy conditions and possible need some modification.(Proposed by Karem) 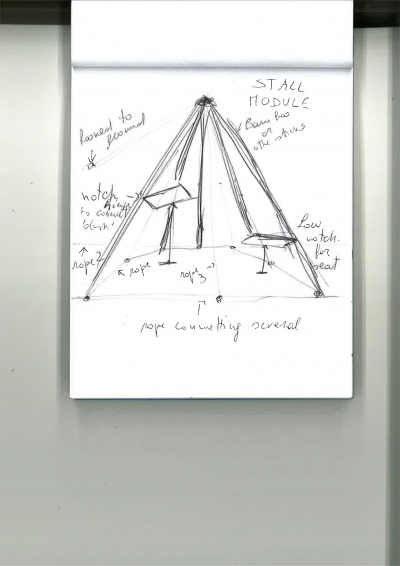 This is a simple idea for a structure that can be easily erected and covered in case of rain.Ropes hold the poles or bamboo sticks in tension and to the ground. They can be fixed to each other and scaled up to contain a number of individual stall holders.Flat surfaces can be hinged to the poles and supported to form tables and chairs. It’s a round, welcoming structure and it might form a nice punctuation to other more angular stalls.(Proposed by Cinzia) 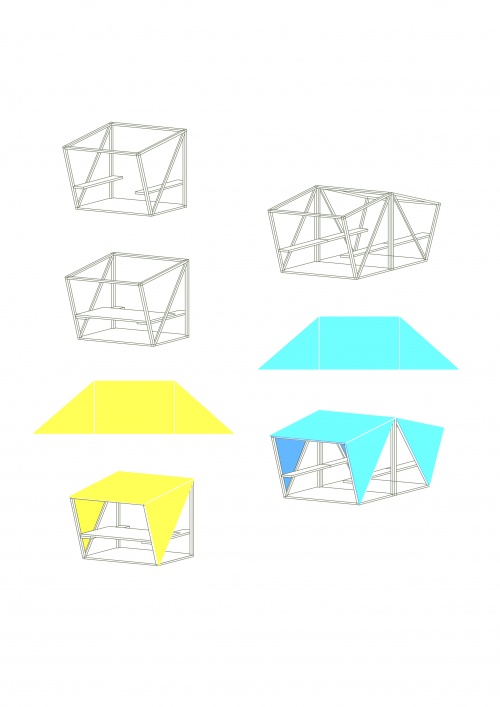 Summer pavilion, Prototype,The shape of pavilion is inspired by village house, aiming to build a ‘small village’ on the parade ground during this summer. The pavilion is basically constituted by two independent structures, suppose to using timber wood. Each structure would provide function for the market stall. A moveable board could be accessed as a table for both structures. The shelter is colourful, covering on the top of structure. It is also can be move or replace.This structure could be produced as several groups which can formulate a village-like arts market. (Proposed by Fangli Chen) 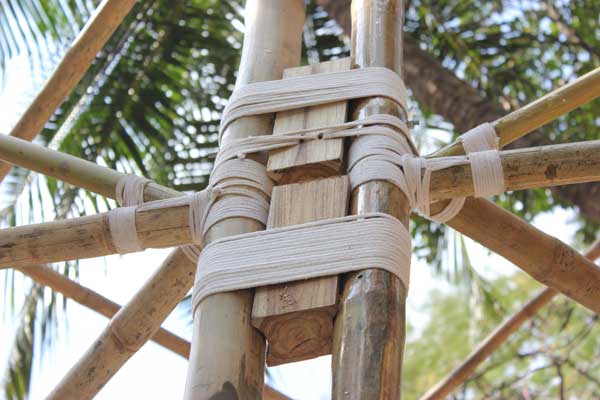