The current idea for a publication is based around a small box or folder containing a number of a5 cards. Each card will have an image and text from one of the contributors. There will also be a number of folded sheets. These will featured documentation of the event, including drawings by (?).
We are having a provisional meeting with Camberwell Press on 16th April at 11.00 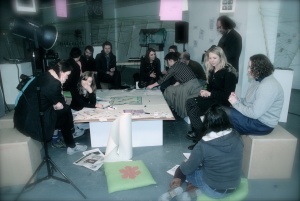 TEXT FOR CP'S CARD IN THE CATALOGUE

In 1904, the American designer Elizabeth Magie developed The Landlord’s Game. It explored real-world mechanisms for accumulating wealth through representative money, deeds, mortgages, taxes, charters and notes. As well as being fun, the game had a social function: Magie believed symbolic play could help children value their innate fairness, and by developing this virtue, they would be more equitable citizens in adulthood.


Some doubt Magie’s claim that people are naturally fair-minded, although there’s no denying the long-term and far-reaching popularity of The Landlord’s Game, which by 1933 had developed into a version of Monopoly currently sold by Parker Brothers. Today’s game however, is notably different in one revealing respect. Originally, players of The Landlord’s Game could choose alternative scenarios: one distributed prosperity evenly, the other was winner-takes-all. Together these demonstrated David Ricardo’s law of economic rent while offering the principles of Henry George as an alternative. Otherwise known as ‘Georgism,’ these economics opposed property relations where rents enriched owners and impoverish tenants, advancing instead a progressive property tax paid by the wealthy to reduce economic inequality. 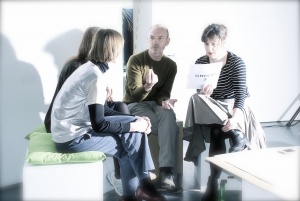 Critical Practice in the throes of creating a utopoly

Recalling The Landlord’s Game, Critical Practice facilitated a Monopoly hack for Utopographies: Evaluation, Consensus and Location. We sought to transform the values laminated on the board and printed on the cards in a 'contest of evaluation', where we discussed and designed alternatives.


Those assembled broke into four teams with each one being its own ‘community of evaluation,’ although values across them soon emerged, Museums, blood banks and other public goods trumped property and Get-Out-of-Jail cards. Instead of a singular ‘monopoly,’ our plural ‘utopoly’ were places where many of us would like to live, work and play. Once the Monopoly hack is completed, Critical Practice will play the game with others

Visit the CP wiki to follow Utopoly’s development and learn about related events.

London is experiencing the most severe property bubble in history - the average price of a flat is £490,000.00

We are collaborating with a group of Utopographers, towards an event in the Triangle Exhibition Space at Chelsea College of Art and Design, 28th and 29th March. We have access to the space from the 24th to install a structure to host discursive events within the exhibitionary frame. The theme is Evaluation (to enable Critical Practice to develop it current research strand) Consensus as its problematic for utopians and chimes with our Evaluative Communities and Location as we are all interested in being creatively estranged in time and space. Utopography is about the interactions of space and temporal narrative, the creation of social dreams and the reality of working within and through the environments of the present.

(Marsha's kick - based on my blog post for CCW)
EVALUATION, CONSENSUS AND LOCATION
Critical Practice and Utopographers

The project grew out of a utopography workshop held at Baltic 39 in September 2013. Subsequent phases in 2014 explored the projection and criticism of ideal societies, the interactions of space and temporal narratives, the creation of social dreams and the reality of working within and through the present. This project also furthered Critical Practice’s research into value and evaluation as dynamic processes for making sense of our increasingly complex world(s). Critical Practice is fascinated by utopographic methods and eager to understand how they may advance the embedded, specific and localised characteristics that distinguishes the cluster’s practice-based research.

Phase 1: Facilitated by Amy Butt and Charlotte Knox-Williams, two preparatory workshops offered space to play with ideas of utopography while linking this with Critical Practice’s ongoing research into evaluation and the cluster’s self-organised ways of working. We unwrapped surprises and made models en route to envisioning our collaborative utopographic experience.

Phase 2: Between 25th-27th May 2014, utopographers from Paris, New York, New Castle and elsewhere joined Dan, Critical Practice and other Chelsea locals to transform the Triangle Space of Chelsea College of Arts into a bespoke context for our two-days of programing. Together we created a network-like roof by tying cords between batons secured to the walls. We discovered through practice that looping the cords over each other made the shonky mesh more robust.

Phase 3: The networked Triangle Space hosted an experimental program of performances, radical screenings, no-holds-barred debates, games, audio environments, swarms and tournaments of evaluation. A medley of immersive and emergent experiences, this phase was open to the public, attracting Chelsea students, staff, alumni and utopia enthusiasts beyond.

Phase 4: We co-created this publication to document the project, looping together new knowledge at the intersection of utopia, evaluation, consensus and location created through our collaborative work and play.

return to Evaluation, Consensus and Location